Acts of Love, Laws of Life

When I got the invitation to attend the congressional hearing on the LGBT’s anti-discrimination bill, I armed myself with studies and arguments to show why that measure shouldn’t be enacted into law. Given the militant and aggressive stance of the LGBT, I primed myself to “fight.” I was wrong. I came away feeling new compassion for them. I still don’t agree with the cause they’re fighting for but I began to understand why they are relentless in pursuit of their “rights.” Sad to say, the fight could be fueled by the lack of love and grace by religious groups ordained to give that very love and grace.

Last Tuesday’s hearing was a gathering of Who’s Who in the Philippine’s religious circles: biggest churches and denominations; mega congregations & umbrella Christian groups; pastors and priests; Catholics and Evangelicals; and Bible seminary professors. While there were people from the academe, government and private institutions, the statements of the spiritual gurus touched the core of LGBT’s DNA that the entire public hearing had been reduced into two protagonists: the Church and the LGBT. It can very well be the Church and the Homosexual, or the Church VS. The Homosexual, which was what actually transpired in the hearing. Lamentably, the relationship between the two has always been adversarial. The homosexuals have always felt the Church’s message of love is not extended to them. Thus bringing them together in this public hearing is almost like a showdown – and given the kind of exchange that took place, it turned out to be just that.

The gathering is supposedly about SOGI (Sexual Orientation, Gender Identity) bill but it became about what’s really the heart of our religious leaders toward the LGBT and the latter’s response, nay, resentment, towards them.

As expected, all the religious leaders present in the hearing were against the bill. But while they had different reasons for opposing the measure, they were one in the message sent to the LGBT community, whether directly or indirectly and that is … “The gay wo/man is not a person.”

One head of a denomination said, “Your class doesn’t exist so who are we giving the rights to?” Which two other church heads seconded by arguing, “You have no legal status because you don’t exist as a class.” Another church leader went as far as saying the group is not “normal.”

And as if these hurting words were not enough, the theologians asserted the bill is against God’s design and it does not uphold God’s order which are both big, catch-all phrases that can mean different things to different people but for LGBT, they just mean, “We’re being branded as anti-God.”

The feeling of rejection and exclusion that has plagued the LGBT for decades, way back their traumatized childhood years, was triggered afresh in the public hearing. The comments of the religious leaders brought to the fore why the bill was crafted in the first place – they’ve been treated as if they don’t exist and shouldn’t exist. Little wonder they are asking for their rights to be recognized respected and included. And this is where the LGBT is partially right.

Inevitably, they defended themselves from the “attacks” of religious leaders. One LGBT leader, reacting to assertions that they don’t exist as a class, countered, “You exclude us yet you say you respect us. Where are your morals there?” It’s heartbreaking to see two groups that are supposed to be allies, as the Church is for “the downtrodden,” becoming adversaries.

To be sure, the church leaders didn’t mean to dismiss them as persons but said those lamentable words in upholding their biblical beliefs. And that could be where the problem lie – being long in truth but terribly short in grace. In their zeal for correcting the wrong beliefs, the hearts of people were overlooked. We no longer see people, we only see our credo. We want to change them by changing their beliefs. But people are never changed by beliefs. People are changed by love. And when they are loved, they change.

One woman who called herself a lesbian captured it best when she said, “Ang sinasabi ninyo ay hindi kami tao … Kapag narinig ng mga tao nyo ang sinabi nyo ay maglilipatan po sila sa amin para po makadama sila na sila ay pinahahalagahan.” That’s a stinging rebuke to us churchmen. What is the point of having the truths when people will not go to us because they don’t feel loved? When our truths do not make us loving, we miss the whole thing.

The same woman then asked aloud, “Paano kami nakakasira sa lipunan?” Words of one who has been wounded, rejected, excluded and dismissed. Words that have characterized the plight of LGBT all their lives.

I know. I came from a gay background myself. In struggling with same-sex attraction in my growing-up years, I knew how it’s like to be discriminated and excluded by the significant people in my life. My father said I wouldn’t amount to much if I keep on having homosexual feelings. My mother told me to suppress these desires. My peers excluded me from their for-the-boys activities for I am not man enough. And later my school classmates, my officemates, my professional colleagues, and yes even my churches, all considered me an oddity that cannot be treated as “normal.” Rejection and exclusion were the themes of my earlier life.

Like the LGBT, I got mad and the anger leaked in my sarcastic humor, in my critical countenance and in my faultfinding behavior. I wanted respect, acceptance and belongingness but I was not getting it. So I got furious and demanded from the significant people in my life to give me what I felt they owe me.

To my LGBT friends, I’d like to say we went thru the same path but we just differed in how we navigated it. I tried to get the respect and acceptance from my family and friends; you, thru this bill, are getting it from institutions via enactment of laws. And I appeal to you — Don’t! Respect and acceptance cannot be legislated. You get that only thru relationships in love — and relating with people take risks! You become vulnerable with people, you trust them with your heart and you respect them. They may or may not respect you back. If they do, you celebrate life as you find a true companion in life. If they don’t, you weep and grieve but still celebrate life for that filters out people who cannot be your friends. Either way, your heart is expanded to receive and give love, and you become more alive in the process.

The answer to your hunger for respect and acceptance is not legislation. The answer is experiencing life-giving relationships that respect, honor and accept you. Relationships with men and women that mediate God’s love. When you do, you will know what God’s design is. No pastor or priest can teach that to you even if they try, as they are wont to do. It can only be experienced.

And even if you win this legislation, you won’t be happy. The respect you need is one that is earned and freely given, not coerced thru a law. It should come from a loving heart, not from a cold law. If this bill could make you happy, I would move heaven and earth for this bill to become a law. But it won’t. Nothing made by men could make you happy. It will come from God Himself as coursed thru men. God with a skin on it!

I invite you to a life that is not about rights; not about demands to be recognized in law; not about being a victim and crying out how you’ve been mistreated. I call you to a life of giving, sacrificing, sharing.  A life that heals our past hurts, rejection and abuse. A life that comes from being dead to our rights and alive in being truly, intimately connected to people. As Jesus said, unless a seed falls to the ground and dies, it cannot grow to be a new life. If you do, you will discover a life that is much bigger, much fuller, much deeper than what this bill could ever promise you. As German philosopher Immanuel Kant once said, “Live your life as though your every act were to become a universal law.”

And for our church, I say, let’s begin that death with ourselves, not with the LGBT. Dying to our standard of righteousness, to a form of religiosity that has no power. It’s not compromising the truths we believe in but living them that inevitably result in loving others. Any truth that doesn’t lead to love and grace is a hoax. And let us be alive in loving and respecting our LGBT brethren .. and yes acknowledging that they exist. Because they do. Let’s look beyond their cause that is not consistent with ours; let’s hear their pain and struggles that led them to fight for a right to be heard.

There is a place for dialogue. Unlike their militant same-sex marriage counterparts in North America, the LGBT in our country is realistic enough to see their sexual norm will not be acceptable to our Christian nation. They welcomed the words of one sect’s leader: “We don’t agree on your sexual practices but we agree on your fight for human rights.” But beyond their fighting stance is a heart crying out for love.

Before the God we follow, these men and women — regardless of their sexual orientation – are valuable, honorable and yes, worthy of love!

When we see the LGBT just like we are, in need and worthy of love before God, we would discover that the more different we seemingly are, the more we’re actually the same.   And when we reach that place, we are in a more compassionate place to proclaim God’s beautiful design for humanity and its sexuality.

*this article was written after the author, attended the House hearing on SOGI bill on September, 2014. 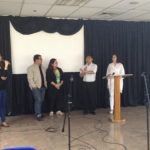 Healing in the Air